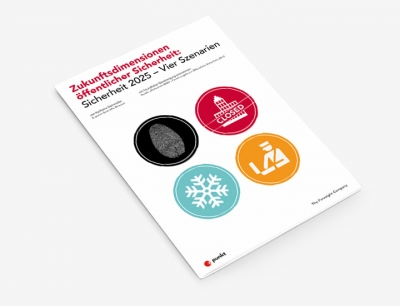 Since at least September 11th, public security – by which we mean the protection of life and limb and people’s possessions in public spaces – has played a prominent role in public debate. In public spaces, the need to keep citizens safe is confronted by a vast array of risks and threats: everyday criminality and terrorist attacks, problems with infrastructure, natural disasters and hazardous substances in the environment. Karlheinz Steinmüller, Z_punkt’s Scientific Director, has developed four scenarios on the future scale of public security that condense the rates of change in this area into four alternative views of the future. The scenarios are taken, courtesy of the Public Security Research Forum 2012, from the study Security 2025 study. Special thanks goes to Lars Gerhold for many valuable suggestions.